FNF After The Week

In the new FNF After The Week mod, everything looked calm and cute, as the young couple was about to go to bed to rest and gain strength after a hard day. Before going to bed, BF and GF wanted to practice a little and sing a song. But a group of guys knocked on the door to join them and have a real rap battle in the middle of the night.

Pico, Skid and Pump will suddenly appear in FNF After The Week mod, who wanted to break into the Boyfriend’s house when it was already night outside. They were not embarrassed by the fact that the young couple had already gone to bed, and therefore, having gathered impudence, they knocked on the door. The boyfriend is always ready to accept a challenge to a musical battle, and therefore, despite the late hour, he let the ill-wishers into his house. After what he has seen in his life, he is not at all surprised by the arrival of these guys. During the rap battle, try to punish these guys so they know who they are dealing with. Good luck. 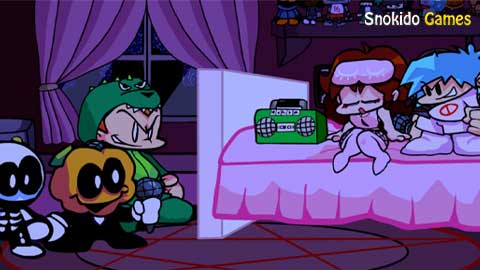