The new FNF Hypno Lullaby V2 mod will be dangerous for our protagonist, who is rapidly gaining popularity among the popular Friday Night Funkin rappers. Evil monsters have come to FNF Hypno Lullaby V2 mod to fight Boyfriend in a musical battle and take his talent for themselves. They won’t succeed because our hero never loses. He is a young, strong, smart and very experienced rapper, so the opponents will have to try very hard to defeat him.

Friday Night Funkin Hypno Lullaby V2 mod will be dynamic with a large number of monsters with unusual superpowers. The most dangerous opponent will be the Hypno pokemon, which introduces its victim into a trance, and then destroys it without any effort. The boyfriend knows this enemy very well and is ready for various unforeseen situations. Alone, it will be difficult for him to take the blow of all these opponents, so help him. Try to catch the arrows that move up the screen to the beat of the music. This will help our main character defeat the enemy faster and easier.

In FNF Hypno Lullaby V2 mod, the battle will be hot, but there will be only one winner! Feel free to enter into a musical duel and help Boyfriend withstand such strong pressure in his direction! The rules of the game are simple: multi-colored arrows appear on the screen above your hero and you need to repeat them by pressing the corresponding arrows on the keyboard. The winner is the character who was able to perform the melody best of all and lost the least number of times. 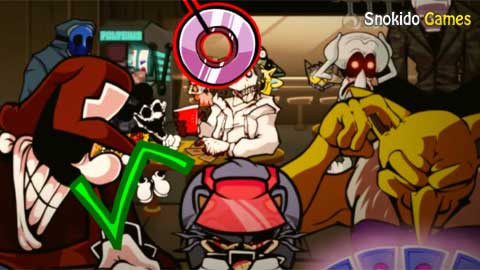