The wild adventures of Tom and Jerry have taken on a whole new dimension. Now the mischievous mouse and the angry cat have become members of Creepypasta-style horror stories. Sounds incredible, but it’s true! Now Jerry has turned into a bloodthirsty psychopath, ready to get to his victim at any cost! Cat Tom has turned into a monster that can scare even the most rabid brave man.

Today at FNF The Basement Show (Tom & Jerry Creepypasta), you’ll meet monsters on the Friday Night Funkin stage, where real hits are born and characters from different universes collide. It’s time to show everyone that talent can defeat even the greatest evil! Your character will be a brave Boyfriend. The guy himself volunteered for a duel with bloodthirsty little animals. Ready to show them who is the coolest hero here? Then take the microphone and go to victory! Let your speed and agility ensure that your enemies will be defeated in this fnf game. Enjoy the game and good luck! 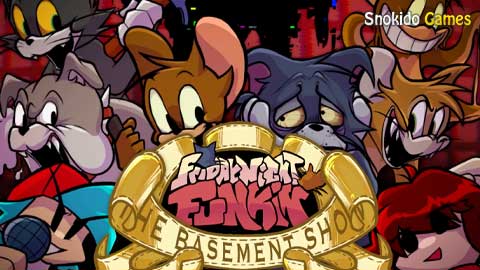