In this interesting Friday Night Funkin mod, your opponent will be Bunzo Bunny, who came from Poppy Playtime to fight Boyfriend in a musical battle. This character used to be cute and fluffy, but after an accident at the toy factory, he turned into a scary and evil monster.

FNF vs Bunzo Bunny mod consists of one round, but it will be very difficult and unusual, because the rules here are slightly different. Your opponent will hang on a cable and hit metal cymbals while singing. During the competition, the Boyfriend must press the multi-colored keys, which at some point will light up in the right color. Your mission in Friday Night Funkin mod is to help the guy in this difficult rap battle so that the monster in the form of bunny is destroyed. Good luck. 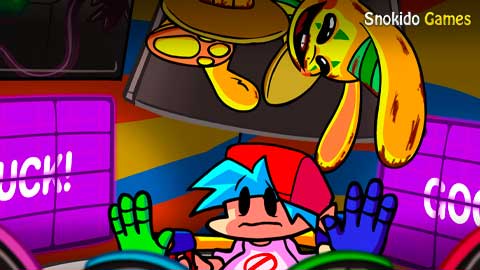