A group of armed bandits attacked Boyfriend and Girlfriend and forced our main character to fight them in a musical battle. You have no choice but to accept this offer in order to save the girl. A dangerous guy with a threatening face stands next to her and holds her so that she does not run away. The boyfriend, to the music that the opponent himself chose, begins to rap.

In FNF vs Deimos (Cancelled Build) mod, you face opponents who rap professionally, and also wield various weapons with great dignity. This means that you are in double danger, both physically and in terms of losing the musical battle. It is necessary to repulse the opponents very worthily so that they do not have a desire to harm any of our main characters. Do not be afraid and try to sing a cool song, after which you can earn the respect of these hooligans and they will let BF and GF go home safe and sound. Try to press the arrows in time to prevent your own defeat. 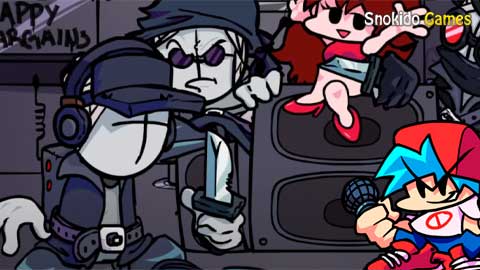