Fear and horror brings Sonic.Exe to everyone who sees it! Danger emanates from him, and only the most courageous and desperate will be able to challenge him, because his mere sight makes each participant tremble with fear! But if you have been playing Friday Night Funkin music games for a long time, then you already know that the mischievous BF is far from a miss and has already managed to see many of the scariest characters!

FNF vs Sonic.exe mod will be very difficult, because you have to fight in a musical battle, with cool music, with such a creepy, evil and huge monster. Boyfriend is not afraid of any opponent, especially when he has such a strong and courageous partner as you! Stand shoulder to shoulder with him and fight back this demon! Press the keys quickly and accurately, repeating the pattern of arrows on the screen, and show everyone that you have no equal in this battle! 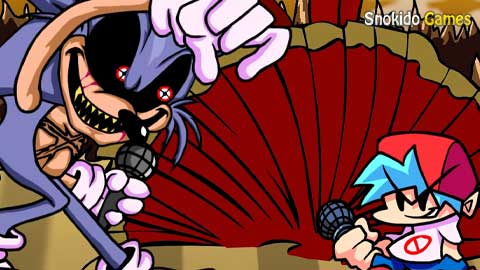