In this new FNF vs Tabi Ex Boyfriend mod, you will fight in the musical arena against a goat-like opponent with big horns growing on his head. He intends to win because his predecessor, Agoti, lost to our protagonist in the last duel.

FNF vs Tabi Ex Boyfriend mod began to gain popularity very quickly, because the character with whom BF will have to compete attracts attention with his appearance. By his behavior, you can immediately understand that this guy is dangerous and very strong. Its head is similar to the skull of some animal, with a large mouth and sharp teeth. He wears a hat with special holes from which horns protrude. Also on his body you can see a sweatshirt with a hood, which he often throws over himself to hide from prying eyes. Help the Boyfriend repel the attack of the enemy and win this difficult rap battle. 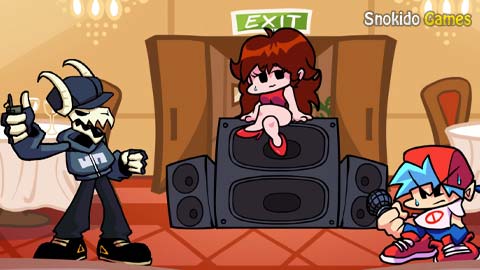