Friday Night Funkin in the Kitchen (SpongeBob) mod will be very fun and hot, although all the action will take place at the bottom of the ocean. All the inhabitants of the underwater world often dine at the famous Krusty Krab cafe, and SpongeBob is the chef in the kitchen. One day Boyfriend came to them because he was shipwrecked. What can an unfortunate guy at the bottom of the ocean do but rap, competing with the inhabitants of these places.

FNF in the Kitchen (SpongeBob) mod began with a pleasant moment when the guy saw Squidward through the window, then the weather was still clear and calm. But over time, a strong storm arose and trouble happened, because the ship sank. This is of course a big minus, since the BF may no longer see his GF, and a plus, because he will have new friends. He will teach them to rap so that it is more fun to live in the underwater world. In the third episode, there will be three characters who will take turns making cool sounds. Your main character will be Boyfriend, although his appearance will be different from the usual. He won’t be very handsome because his skin wrinkles a lot underwater, but his talent hasn’t gone away. Have a nice game. 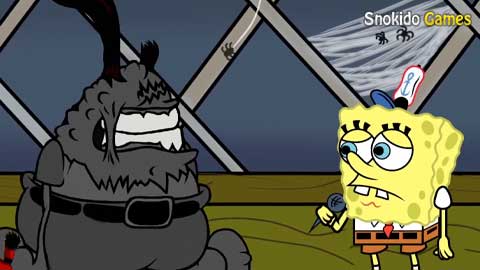