This is a story about a boy who was visited by terrible monsters in his dream to arrange a competition in a musical duel. The game will be divided into several episodes, in which both nightmarish rivals and good friends will come, with whom he will also compete.

Friday Night Funkin Twinsomnia (Boy and Girl) mod starts with the creativity of the artist, who will draw with a pencil all the characters in this game. The plot of further actions with animated movements will also be briefly outlined. Once all the heroes have been colored in their respective colors, the first round of this FNF game will begin. First, the boy will face a terrible black shadow that will appear from under his bed. In the second round, the boy will be joined by a girl and another interesting kind character with a wide smile. All other rounds will take place in a dark room with terrible opponents who will greatly frighten our main character and girl. Help the boy defeat these monsters and wake up quickly. 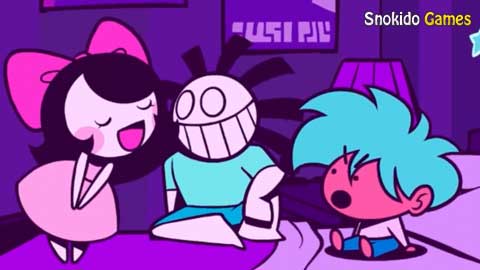