In the Friday Night Funkin vs Herobrine Reborn mod, a character from the world of Minecraft will appear who wants to become the winner in a musical duel. He challenged Boyfriend to a duel, because he knows that this guy is not a blunder and can fight back anyone.

In a one-stage Friday Night Funkin vs Herobrine Reborn mod, a dynamic melody will sound, under which you need to have time to catch arrows flying up. Your opponent did not come empty-handed, taking with him two sharp swords, which he will swing while singing. BF did not lose his head, and also took with him a weapon and protection with which he could respond if the enemy attacked him. Only these two characters will take part in this duel, because the rest may be in danger. The fight will continue until the icon reaches the edge on the lifeline, which is located at the bottom of the screen. It will be interesting to see who wins. 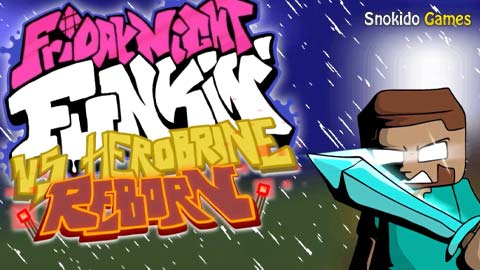