In this Friday Night Funkin vs Whitty Full Week mod, you will meet an amazing character in the music scene who has a bomb instead of a head. He loves to sing very much, despite the fact that his appearance repels many. Not every musician is ready to go on the same stage with him, but Boyfriend accepted his challenge.

Friday Night Funkin vs Whitty Full Week mod will be very stormy and a little scary, because singing next to such an opponent is not very comfortable. Every second you think not about how correctly and clearly you need to rap, but about how your opponent’s head doesn’t explode. BF has no other choice, because if he refuses this fight, then the parents of the GF will forbid them to be together. This musical duel is in the interests of a young couple in love, so they agreed to this feat. Help this couple to meet, and for this you need to do everything possible so that Boyfriend becomes the winner in the FNF game. 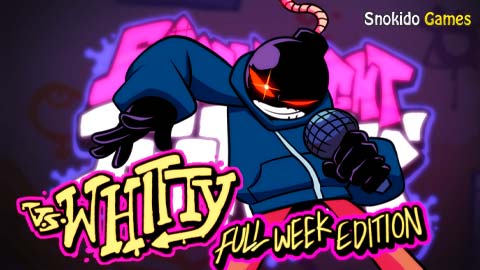